it's me again! 2 weeks ago I was on holidays but now the day-to-day life is back and with it all its work and duties but also its pleasures ;) Especially because we had a lot of parties last week.
Ann Meehan's birthday had to be properly celebrated just as well as Minna and Kalles Farewell. That's actually not nice at all: they are going back to Finland after staying in the community for one and a half years. They were great houseparents for Brigheen and everybody misses Kalle and Arni already now, Minna and Helmi will leave for good next Wednesday :(
This time I've got some pictures here: 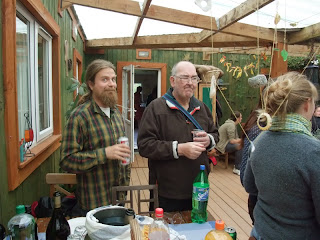 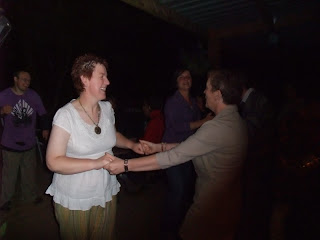 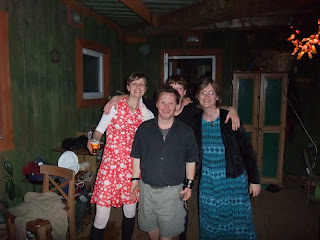 Then we continued with the St. John's celebration. Each it's a great fire and we included a barbecue. It happened on our field where we collected all sorts of old wood and branches and it was an immense pile. First I had some concerns that it wouldn't burn properly but soon they dissolved into smoke just like the timber. I personally enjoyed it very much - later on Mischa called me a "Pyromaniac" ^^
I even took a video although it seemed much more impressive in reality...

And the day after we finished with Brendan's 56th birthday. It was rather relaxed with a few drinks and stuff. Amongst others Julie looked after everybody's entertainment with amazing dancing performances. So also Julia, our new co-worker got a pretty good impression of the liveliness of our community ;)
But now I'm personally quite happy to just have a few normal working days...sometimes work can be relaxing too! :D

However... that's all from me for today.