The Tale Of King Arthur and Maid Marie-Anne

Arthur and Anne-Marie are leaving this Saturday
and since they have been in the Bridge for a long time
here is a story for their amusement !!! 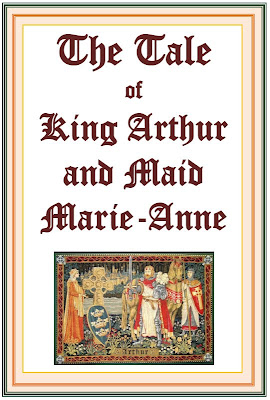 It was in a time long gone by when knights were still courteous and maids were still virtuous, in a far corner of Eireann where the man drank stout out of bottles by the name of Arthur Guinness and had their hair in wild strands. It was in these strange lands that a boy appeared. He had come out of the nebulous wars where he had fought barbaric battles with the Angle Saxons and he came with tales of woe that could grow bigger by the minute. And he had a deep love of all creatures weird and wonderful . And he brought his gifts to a place called Grangebeg where he served as an apprentice squire and had to work very hard. And while he courted the ladies dug the grounds and fed the swine his days in this place on a hill soon came to an end and he was sent to travel the road to a pace called Cill Cullin.

Now as it happened in this place there was a giant turnip that was buried deep in the ground and ancient lore told that nobody would ever be able to move this turnip unless they were of royal Ulster blood and a descendent of the true fairy king of times long gone by. And the wizard called Merlin the black who had a beard and was a big man said he would declare anyone king of the fairies if they would move the turnip from the ground. And many people had tried to move the turnip over the years but it wouldn't budge.


Now Arthur on his way to Cill Cullin had met three knights called Spotty, Stripy and Pinkie and they were wild and barbarian knights and had tormented and plundered the lands with their grunts and snouts. And Arthur fought these knights and in his wit he outsmarted them all, even though he had to fight with stripy to the last in the middle of the riverbed and wrestle him to the ground. But in the end he made them his squires. Arthur vowed never to forget the battle in the riverbed and that he would wear the red garment he wore that day till the end of his days.
And when this merry entourage arrived in Cill Cullin and heard about the legend of the turnip, Arthur felt that by rights the turnip was his and but he asked spotty to pull and when the turnip didn't move Pinky gave it his best and Stripy tried his last but it was Arthur that finally went up to the turnip and with a little pull held the turnip in his hand like a sword. And a mighty weapon it was. And the peasants rejoiced and they were all in awe and they built a cathedral in his honour and Merlin the black, the large magician crowned Arthur in this mystery centre and declared him King of the fairies.


Now Arthur met a maiden in this place called Marie Anne and she was of the Saxon descent from a land far away. She was shy and small, beautiful and virtuous and her heart was so large that it encompassed anyone in need. And Arthur brought her flowers and courted her , he was so in love the he even forgot about his squires Spotty Pinkie and Stripy and he would stare in her eyes and she would blush. They were under a magic spell. So deep were their feelings that for three months they could not see or hear anything around them . But when Arthur awoke from his spell he said to Marie Anne that he had to go forth and find fellow knights .


And Arthur went through the lands and discovered the knights of the poultry and three of them followed him in his every footsteps loyal to the last, and other knights of the poultry soon joined the band of knights. The biggest and proudest of them all was Sir Turkeylot. He wore black armour and had a red helmet with a blue face shield and he was brave and fierce and beautiful to behold and he kept all the other Knights of the poultry in cheque , so that there was discipline and order.


It was Arthur that would mark his territory with empty mugs that were left as a gift to the peasant at regular intervals. They soon became the currency of the land and his generosity in supplying mugs was such that it emptied the state coffers and the treasurer called Geraldine the stern would soon replace them with a new currency of mugs made of paper because of the current economic climate.


But Marie Anne was wooing for Arthurs time and did not want to share Arthur with Sir Turkeylot and Spotty and Stripy and Pinkie and often lured him away from the knights and she made him vow to give up the filthy habit of the cigrette and made sure that he slept enough to be refreshed for his fights with the knights of the fox and knights of the mink and all the other battles he had to face in his day.


And Arthur met many other noble kings the Three kings of de Isserín called Sir Leonardo the Noble and Kevin de Recycling and Sir Colm the Cheeky. And he united the clans of the Brigheen with noble man like Sir Patrick and De Sirrka and the knights on other side of the river with the Knights of the Poultry Cathedral .
Meanwhile Maid Marie Anne wove beautiful garments and became a friend to Marion de Prickly and Lorna de Tea. And she served the knights in the halls of An Tearmann together with Christine the Bold and Lady Nolan the Just with meals and cakes in abundance and her smile charmed many princes in the Curragh of Eireann. Her Eye for beauty and talent with the needle enchanted much that she touched and she was very popular with all the subjects in the kingdom


But King Arthur and Marie Anne were still on their search for Avalon and so the day came when they made plans to sign the treaty of dole and move into the wild plains outside the kingdom of the knights of the Poultry Cathedral. And much was the sorrow and big were the tears when they said goodbye and they vowed to return and said goodbye to Sir Turkeylot and rode into the sunset on their search for Avalon. But in the land of the knights of the Poultry Cathedral they will always be remembered and their tales will be sung in the halls of An Tearmann and the friends they made will always remember Marie Anne's large heart and King Arthur's mighty adventures.